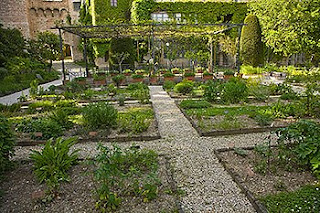 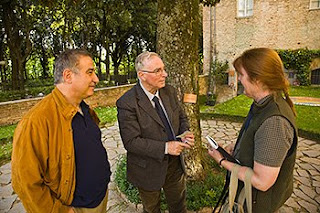 We meet Roberto Venanzoni in the Department of Natural Sciences at the University of Perugia, where Benedictine monks still share the campus with the faculty and students.

Roberto has arranged for us to meet Professore Alessandro Menghini, who conceived the university’s Medieval Garden.

Menghini is a bright-eyed, two-legged encyclopedia of all things medieval: numerology and alchemy, medicinal and culinary herbs, Scripture and the Book of Nature, which many people in the Middle Ages believed was as much the word of God as the Bible.

Professor Menghini spends an hour walking us around the garden, explaining its symbolism. It is a microcosm of the moral and physical universe arranged according to numbers once considered sacred. Planted in triangles, circles, and rectangles of soil are hundreds of plants used as medicines, foods, seasonings, scents, and symbols during the time of Saint Francis.

It’s impossible to take it all in at once, but Menghini’s enthusiasm is contagious. Suddenly every plant, every color, every fragrance and taste has its own character and significance.